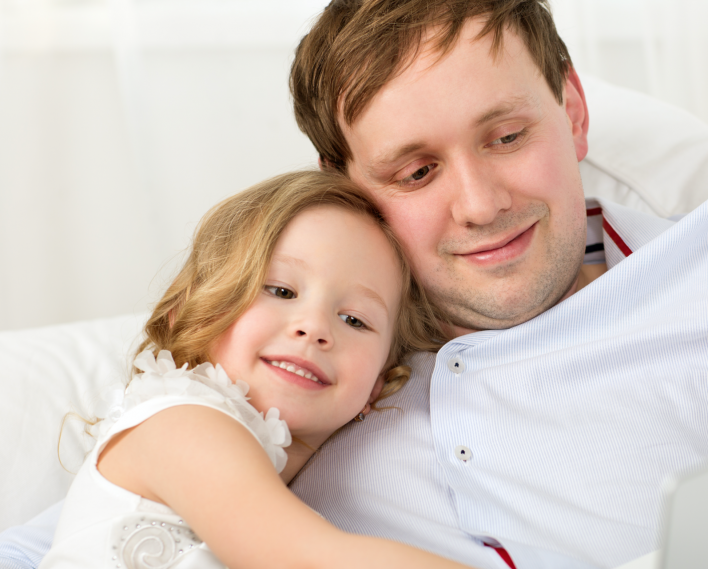 The hugs, the laughter, the jokes, the fights, the tears, and snuggles…these actions and emotions are a daily occurrence between my daughter and my husband. They love each other so much! Tonight they are snuggling on the couch and he is stroking her hair while telling her a made up story about a pony and a little girl (who just so happens to have the same name as her). I am warmed in my heart, not just because it’s possibly the cutest thing ever, but also because I never experienced what she is currently experiencing. My father and I never had this relationship, this bond. It’s a whole new experience for me to watch and that I’m so glad she has it. Growing up, my father and I never had a good relationship. I always wondered why we couldn’t make things work, why he was so distant.

My dad was a man who had it hard growing up. He had a very angry father who took it out on him through abuse and torment. When you have years of suppressed anger and so much pain, it never goes well. Either you become what you were raised with or you hide. And my dad, for the most part, he was a hiding man.

When I hit puberty and started to become a woman, my father and I began to become distant. It seems typical that as a girl becomes a teenager it would change, but it wasn’t the same. My father started to treat me extremely different. He made weird jokes about my growing body, pushing me farther and farther away. He would get angry at me for nothing. I thought maybe he just was unconformable and it was a normal thing that a father goes through. Over time, as I met healthy families and saw their dynamics, I quickly realized why my dad pushed me away and it all became so clear. All the memories of catching my dad on his computer and late nights while he was watching TV, the dirty jokes about me, the comments, the uncomfortableness, the worries he had about people thinking he had women escorts when he would be with his daughters. He was addicted to pornography.

When I was the ripe age of being a tween, the internet was new. I remember going to chat rooms with my sister and thinking it was so cool to talk to strangers instantly (such a BAD idea) and using ICQ was the bomb! That was also when pornography was becoming not just a magazine or a movie you had to rent. It was more secret, more hidden, more private and free. For my dad, being a man who was in pain, hid his past so hard, and who is also very tech savvy, this would have been an easy way to help numb it all.

Because of my dad’s addiction, he saw me as a body who had parts. I was a woman and women=sex. That is how he trained his mind. He couldn’t handle it and he pushed me very far away so that he could keep his addiction and it resulted in not having a relationship with me. He existed in my life, but he was never a part of it. He loved his computer, his addiction, and his pain more than he loved his precious daughters.

I wish there was a happy ending to this story between a father and his daughter, but there isn’t. He is still addicted and we are still not close. But I can happily say that as my daughter grows up with her daddy who has painfully dealt with his addiction and sees the worth in her. She will have a better and healthier experience than I had. She will know her worth because her daddy fought for her.

Help! I need to talk to my wife!