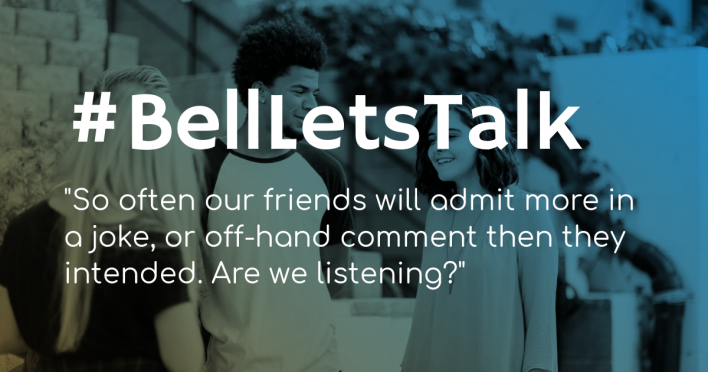 The most extraordinary thing happened to me in Costco the other day.

But what does that have to do with fighting pornography?

Today is #BellLetsTalk day. Regardless of whether or not you believe it’s just one big corporation’s way of getting free promotion, it has become a day across Canada for people to bravely speak up about mental health.

But what does that have to do with fighting pornography?

I don’t believe I ever was to the point where I would have been diagnosed with anxiety or depression from a clinical perspective. But multiple times a month I speak with someone who is dealing with that. Suffering from various mental health ailments, they ask me for help getting free from pornography and I tell them, you have to deal with all of it. Thank you for asking for help, but let’s find you an expert who can help you with what is at the root of your fight, so you don’t turn to other self-medication.

But I’m not actually writing this for people dealing with Mental Health issues. I’m writing this to their friends. Which is you. All of you. And that is where Costco comes in.

So there I was…on a weekend. Have you ever gone to Costco on a weekend? It has a lot in common with the final battle scene in Lord of the Rings. Just bodies everywhere, screaming, yelling, desperation, an ogre or two. When I finally made my way to the cash the cashier greeted me with a standard cashier greeting. “How are you doing today?”, and I responded with what I thought was a slightly funny joke considering the surrounding chaos. “Oh just mildly claustrophobic.” That’s when the extraordinary thing happened. She stopped scanning my items, looked me in the eye and said.

She asked me gently and sincerely. I was so startled to be asked a real honest question by a human in the middle of Costco that it took me a moment to try to explain that I was just cracking wise about how busy it was. She said, “oh ok…are you sure you’re ok”.

The cashier did three extraordinary things in my opinion. At least to someone conditioned in Canadian politeness which is often the same thing as indifference.

Secondly, we need to be willing to risk the uncomfortableness. Asking questions like, “Are you ok?”, or “Is there something you want to talk about?”, can lead to awkwardness sometimes, but should we not consider a little awkwardness worth the possibility that we could end up being a lifeline to a friend in need?

This day for #LetsTalk, my promise is to listen more.