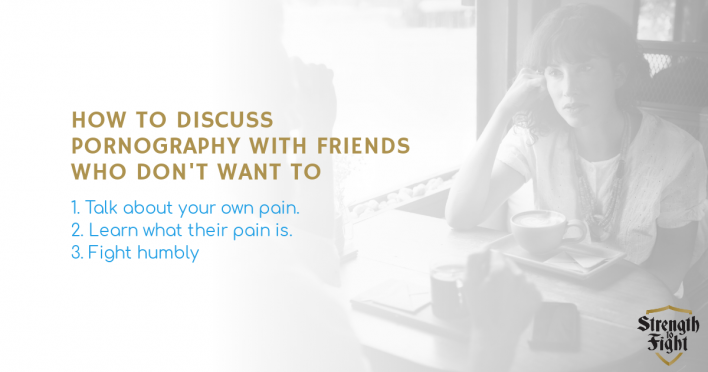 So how can we break-through people’s barriers? If pornography is truly as bad as we think, and causes as many problems as we believe it does, I believe that it is our duty as citizens of earth to bring up the problems of pornography even when they might seem an unwelcome topic.

So how can we talk about such a difficult subject when it seems an unwelcome subject? I have three suggestions.

1. Open up about your own pain.

“I didn’t think too much about pornography, but last Sunday my 8 year cousin was making jokes about it and I realized I’m not cool with it. But his parents just laughed.”

The second most effective tactic is to figure out what they care about in the world. Every 22 year old watching pornography and saying “it’s no big deal” doesn’t want their 14 year old sister watching it. So talk about protecting kids.

Many people don’t understand the harms of pornography, but nobody believes slavery is a good thing. Does your friend draw a red “x” on their hand on #endslavery day? Bring up the connections between pornography and human trafficking. Not in a preachy way. Use humility. “You know what I just learned? Did you know…..”

Maybe they see all attempts to talk about sexuality as “Christian Oppression of LGBTQ+ people”. Well, talk about how pornography has been scientifically proven to make people feel isolated and lonely. That’s the LAST thing kids struggling with sexual identity need to consume.

The point is, if you can learn what someone cares about there is almost always a door open to talk about pornography. Because pornography ruins everything people care about.

This is particularly effective when your friends are struggling secretly and are worried you would judge them. One girl asked me how she could start the conversation with her guy friends. This is the type of girl that seems like the absolute most perfect sweetest girl. No guy would be comfortable with her bringing up the subject at all. So I told her “Just put covenant eyes on your phone. Whenever your friends see you. the “perfect girl”, using accountability software, it will send the message that accountability and taking pornography seriously isn’t a sign of weakness, but even the people they see as “perfect & innocent” are fighting it. It gives them permission to be more vulnerable and honest.

Or sometimes by just treating it like any other cause can normalize the conversation. We’ve heard so many stories from people posting their fundraising page for our annual “Skate-To-Fight Pornography” and the conversations people started to have with them.

I personally have received donations and emails from people I NEVER thought would believe pornography was wrong. But when I posted about fighting pornography like it was just any other cause, it opened the door for these people to speak up and say, “hey, I have a problem with that too!”

It all starts with being open and vulnerable like this. Picture it less like being a fireman or cop running into a situation to save someone, and more like when that first brave girl stood up to accuse the USA Gymnastics trainer of assaulting them. They just stood up and said, “here is my pain.” And that gave permission to all the others to step forward and be open and vulnerable as well. It doesn’t have to be the exact same story as theirs, but your honesty and vulnerability can be the door they walk through to start to open up as well.