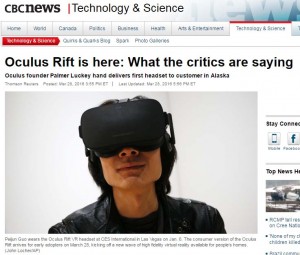 Virtual reality aims to offer a totally immersive experience. The headset goes directly in front of your eyes and takes you out of reality and places you in a fantasy world, which has already proved too much for some users. One man who tried it out in a mall collapsed to the ground and began flailing around and screaming. He could only be brought under control once the Oculus Rift had been removed from his face. It’s concerning that this same technology will soon be available to passengers on airplanes.

Creators of the Oculus Rift do not recommend it for children under 13, and warn that prolonged use could “negatively impact hand-eye coordination, balance and multitasking ability.” And the technology only promises to increase in intensity over time. While this great experiment is being conducted on the human race, the full consequences of the technology have yet to be discovered. So far scientists have found that when rats experience virtual reality, “brain shutdown” occurs, and 60% of the neurons in the hippocampus stop working, the region in the brain involved in mapping out space, memory, and learning. And the neurons that don’t completely shut down “show abnormal patterns of activity.” Tests of children using virtual reality have found that it often confuses their memories, and looking back on the events a week later half of them fail to distinguish between the virtual world and the real world.