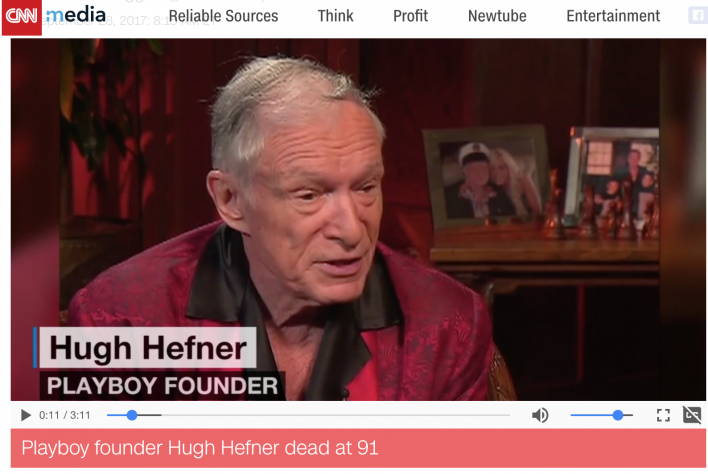 The top trending story around the world this morning was the death of the founder of Playboy, Hugh Hefner.

The death of every human is a sad day, but unfortunately today’s memorials to the man who made pornography so mainstream he nearly put himself out of business, are in their very adulation a condemnation of his life’s work.

Tributes to the “Man who showed me my first breasts”, who “Championed sexual freedom” and “A liberation icon”, all reveal that tragically, his championing of the sexual revolution accomplished nothing but lasting damage to society.

As the National Center On Sexual Exploitation Stated:

“Hugh Hefner was not a champion of free speech. He was a pioneer in the sexual objectification and use of women,” ….“Research shows that Playboy historically portrays female sexuality as subordination and universal availability to the male gaze. How can our society accept, let alone applaud, these messages about the value of women when we are simultaneously struggling with campus sexual assault, military sexual assault, and the culture of sexual harassment in Silicon Valley?”

And the the sadness of his life can’t even be summed up in the exploitation of women, but the spreading of loneliness that he is not only responsible for, but suffered himself.

As Jonathon Van Maren summed up several years ago:

…While Hefner would often often have unprotected sex with multiple women, he could not reach sexual completion without using pornography and stimulating himself.

How could a man with all the women in the world be so incredibly lonely? World-renowned psychologist Sue Johnson explained it to me this way. “People say, Sue what about dancing the Tango? Isn’t it fun to go to the dance hall and meet new people, dance with new partners? And I say, of course it is. But nobody wins the world championship dancing with a new partner. The people who are actually good at the Tango are dancing with the same partner for 20 years. They know every silent communication, every twitch of body language.”

Hugh Hefner’s legacy, is that of a man who never learned how to truly Tango. The idea that each new partner could be a better partner was the very thing that led him to never find one. And sadly, it led him into a life where no human partner could bring much excitement at all.

It is a pitiful thing, and by pitiful I do mean we should pity him, that this man has gone to the grave never truly knowing love. One of the most infamous pornographers of all time Bill Marigold, said in an interview for Over 18, “Love is a myth, only recognition is real.”